Inter-Club Golf for the Over Fifties

You may have noticed this year we tweaked our formula for dividing teams into the 4 zones, for the Gents draw. The Ladies zones have always had this mix, so will be familiar with this – so what have we done differently in 2013 for the Gents Zones…?

In the past we grouped clubs into one particular zone, so for example, Matlock A, B and C would all compete in the same zone. The only exception was if a club entered more than 4 teams, we may split them between 2 zones. Mapperley Golf Club were the first to do this entering over 4 teams, this year they entered 8!

This year the committee mixed it up, so what did we do and why;

We listened to your feedback, about wanting to play a wider range of clubs in the competition alongside willingness to travel a bit further to play new clubs.

We saw how successful the ‘mix’ was with the Ladies Inter-Club (Ian Burtoft Trophy) and had positive feedback from the Ladies on the draw zone format.

We still applied some geographical constrains but allowed the zones to overlap and have a wider reach.

This also reduces the chances of clubs playing each other in Round 3, we have stuck by our formula for the draw for a team not to meet another team from the same club in rounds 1 and 2. 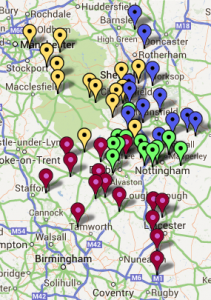 I hope you agree this mix had added to the enjoyment of the competition and in the forthcoming years allow a greater variety of teams to compete against in the early rounds.

Let us know what you think…

2nd Round at Sitwell Park

A tight match at Matlock

The Pink Ladies Start the Journey to Defend Title

Success in the sunshine

You may select your cookie preferences below however you need to use your browsers settings to fully opt-out of these cookies.

We have detailed them below so you can identify them and their purpose when changing your browser settings.

Necessary Always Enabled
Necessary cookies are absolutely essential for the website to function properly. This category only includes cookies that ensures basic functionalities and security features of the website. These cookies do not store any personal information.
Functional
Functional cookies help to perform certain functionalities like sharing the content of the website on social media platforms, collect feedbacks, and other third-party features.
Performance
Performance cookies are used to understand and analyze the key performance indexes of the website which helps in delivering a better user experience for the visitors.
Analytics
Analytical cookies are used to understand how visitors interact with the website. These cookies help provide information on metrics the number of visitors, bounce rate, traffic source, etc.
Others
Other uncategorized cookies are those that are being analyzed and have not been classified into a category as yet.
SAVE & ACCEPT
Powered by