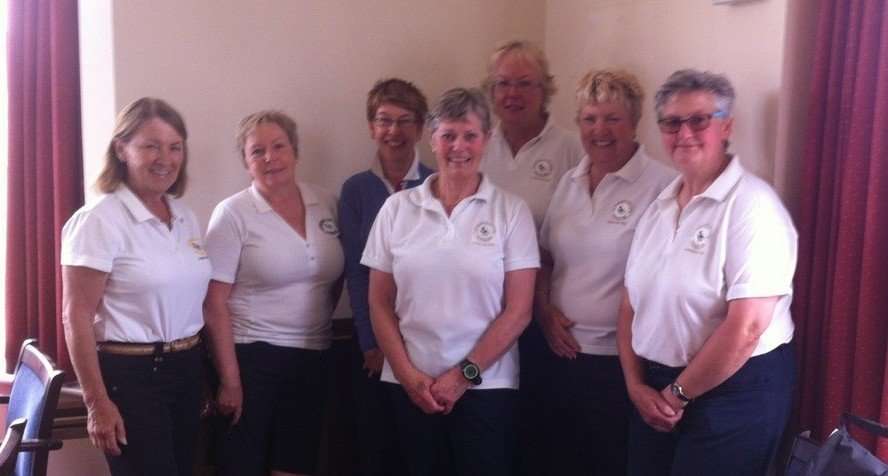 The second round of this year’s ladies Taskers challenge saw them making the trip to Rushcliffe to contest the seven singles matches.  The drive up the motorway was uneventful although the very low cloud wasn’t inspiring great confidence about the weather.  As it turned out, the rain stayed away and instead conditions akin to a steam bath prevailed with very little wind until the last few holes.

With the all-too familiar scenario of Hollinwell in 2015 replaying, the overall match was even with six matches completed.  This time it was down to Taskers team captain, Sue Fletcher, to head off down the 19th to bring her match to a conclusion.  Sue had holed out for par on the 18th green to win the hole and square her match, in which she had been giving shots to a very worthy 18 handicap opponent.  With impromptu caddies and supporters in tow, Sue and Rushcliffe’s Kathy headed off down the first.  Three shots played and honours were fairly even on the green.  Putting first, the home player went close enough for Sue to concede, leaving a testing 6 footer to carry on the match down the second extra hole.  Alas, it rolled just wide and so victory went to Rushcliffe 4 matches to 3, bringing the Taskers competition to a close for Lutterworth ladies for another season.

Recovering in the locker rooms from their epic battle, Kathy revealed that she had kept a scorecard which indicated that not only had she played to a 13 handicap, but Sue had also played under her own handicap.  Definitely a great contest.

A sumptuous Victoria sponge and tea was enjoyed by all and Sue, on behalf of Lutterworth Golf Club, wished Rushcliffe every success in their progress through the competition.

Thanks go to Sue for captaining the side and to all ladies who played in the matches.  In the Rushcliffe match the team was Ada Parr, Louise Burrell, Jacqui Knight, Liz Toney, Carole Burton, Sue Fletcher and Mary Hawkes.

Kibworth B on Mothering Sunday